HomeSpace-time evolution of the geomorphological features of the Agri Valley

Space-time evolution of the geomorphological features of the Agri Valley 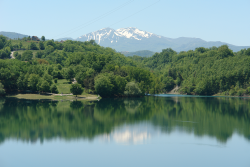 The project objective was to study the space-time evolution of the geomorphological features of the Agri Valley in a perspective of analysis, vulnerability and seismic risk monitoring of the archaeological site of Grumento Nova.

Indeed, thanks to the project activities, we tried to reconstruct the geomorphological and environmental variations of the study site compared to the historical period described by Mallet, and to assess the seismic vulnerability of the archaeological site of the Grumento Nova.

The Agri Valley has a high basic seismic hazard that, associated to site amplification phenomena, is described with extreme accuracy already after the earthquake devastated the Basilicata and Campania Regions on 16th December 1857 (Robert Mallet, Great Neapolitan Earthquake of 1857, The First Principles of Observational Seismology, Chapman and Hall, London, 1862). The presence of industrial infrastructures, mainly related to oil extraction, contributed to radically modify the geomorphological features of the area, outlining extremely hazardous conditions.

The identification of Grumento Nova as study site was decided by the concomitant presence (on small territorial areas including also neighboring villages) of the Pertusillo Dam Basin, the Viggiano’s Oil Center, as well as the archaeological site of Grumentum, an important city of ancient Lucania with interesting preservation issues of the artistic and architectural heritage.