The Centre of Integrated Geomorphology for the Mediterranean Area (CGIAM) was established after a turn of events organized at the end of 60’s on initiative of scientific institutions of nation and international relevance, whose purpose was to foster a coordinated action in the scientific field for facing the problems connected to the regional development from an “integrated” viewpoint.

Some centres of integrated studies named “Centres of Integrated Geomorphology” were already established in other European Countries, and due to the importance of development plans, social and cultural heritage, the complexity of soil protection and Mediterranean coastal areas against pollutants, the Mediterranean Region is one of the area where this necessity was strongly perceived.

Hence the commitment of Italian scientific bodies and UNESCO to find a single concrete solution, namely a Coordinated Mediterranean Plan, considering the impossibility to solve the problems connected to the protection and development of the Mediterranean Regions without placing them in the wide Mediterranean context.

For this aim, after a conference in Calabria in 1967 organized by UNESCO, the Italian Ministry of Foreign Affairs and the South Bank, in October 1973 a meeting was held in Potenza arranged by the Italian Geological Service and the Institute of Botany of the University of Rome, under the aegis of UNESCO and Basilicata Region, attended by renowned experts and the then-best schools in the field of integrated geomorphology as follows:

During the meeting, it was recognized the need to establish a Central Coordinator Body able to face the problems linked to the protection and regional development of the whole Mediterranean Basin.

The success of the meeting not only sanctioned and codified the need to establish such a Mediterranean Centre, but also underlined the unanimous consensus of all the participants in recommending the Basilicata Region as its headquarter due to its geological, geomorphologic, landscape, environmental features as well as strategically located in the center of the Mediterranean Basin.

The advantages and the opportunity to establish the Centre of Integrated Geomorphology for the Mediterranean Area in Basilicata were particularly supported by the UNESCO Representative, the soviet Prof. Konstantino Lange, Head of Earth and Geomorphology Science, mainly with reference to the suggestion of some French delegates who proposed the candidature of Montpellier, France.

The choice of Basilicata and then Potenza was unanimously approved by drafting a resolution in which the participants wished for the organization of an international operations office in Basilicata, as above described.

The signatories of the document were the representatives of scientific institutions of nation and international relevance such as:

This idea was successively shared also by the Italian Ministry of  Foreign Affairs that, in November 1975, supported the establishment and the operation of the Centre of Integrated Geomorphology for the Mediterranean Area.

In November 1977, through the D.G.R.  n. 305 of 25.11.1977, the Basilicata Region made official the launch of the constituent phase of the Centre, unanimously subscribed by its Regional Council. 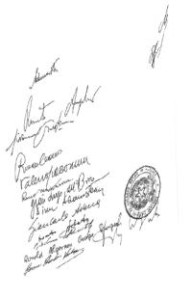 CGIAM has been established for an indefinite duration, as non-profit organization, aimed at fostering the socio-economic development of the Mediterranean Region, through the integrated geomorphologic study of the areas of interest in order to reduce the natural and man-made risks, by using advanced technologies and guaranteeing an efficient protection of people and environment.

After the 1980 Irpinia earthquake that hardly hit the Campania and Basilicata Regions and thanks to Eng. Leggeri, Member of the Technical Scientific Committee of the Centre, CGIAM has started dealing with earthquake studies.

He should be given the credit for the design and achievement of the first seismometric network of Basilicata.