HomeMethodology for the Systemic Seismic Vulnerability

Methodology for the Systemic Seismic Vulnerability 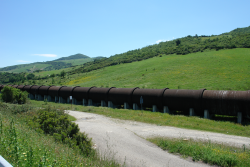 The main project purpose was the Systemic Seismic Vulnerability.

The analyzed lifelines were: roads, railways, waterworks and electrical properties. The Systemic Seismic Vulnerability was carried out in the following phases:

– Analysis and verification of available data;

– Development of the most suitable model, in function of the available data and the level of analysis to be carried out.

The project results were the probability values for reaching or exceeding certain damage levels for the roads, railways, waterworks and electrical properties falling in the town of Potenza, in non-urban environment. 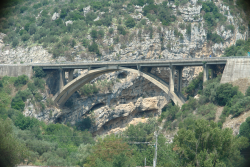 The probability for the different damage levels has been obtained through the fragility curves and the log-normal cumulative distributions, for reaching or exceeding different damage conditions, given the value of the ground shaking. These curves have been obtained through statistical analysis of the damage caused by earthquakes carried out by the Federal Emergency Management Agency – FEMA (American Civil Protection), reused and corrected for the European infrastructure in the RISK-UE project.

In general, the networks analyzed showed a good behavior for the above seismic scenario: the maximum probability is of 70% and can be reached just in some cases for low damage levels, involving at most a slight reduction in the use of the infrastructure. For moderate damage levels the probability of 20% is not generally exceeded. The evaluation of the shaking does not take into account, however, any site effects due to the lithology and the phenomena of seismic amplification due to the morphology (basins, ridges). In order to use the  fragility curves, it is made the hypothesis of rigid ground for the application of seismic motion attenuation relationships necessary to get the ground shaking in terms of Peak Ground Acceleration (PGA), Peak Ground Velocity (PGV), Peak Ground Displacement (PGD) from the magnitude of the epicenter.